By Kevin Kidder | February 26, 2014
Share on facebookShare on twitterShare on emailShare on print 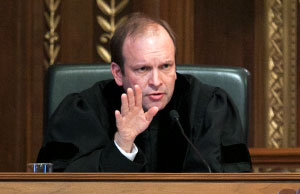 First District Court of Appeals Judge Pat DeWine served as a visiting judge on the Ohio Supreme Court today and heard oral arguments in an insurance dispute that stems from a fatal car crash involving a parked commercial trailer.

According to the Ohio Constitution, in the event of a recusal by a justice the chief justice can select any of the 69 sitting Ohio appellate court judges to sit temporarily on the Supreme Court.

Today was Judge DeWine’s first time serving as a visiting judge on the Supreme Court.

Judge DeWine has served on the appellate bench since February 2013. Previously he served as a Hamilton County Common Pleas Court judge for four years. A 1990 graduate of Miami University, Judge DeWine received his law degree from the University of Michigan Law School in 1994. He was admitted to the practice of law in Ohio on May 15, 1995.

“I am honored to be asked to sit on the Supreme Court for this important case,” Judge DeWine said.